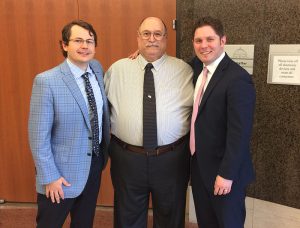 "I do the work I do because I want to make a difference in people's lives," Walters said. "When a big company is bullying the little guy, we go to bat for the little guy and let them have their day in court. Justice prevailed in this case, and that's what drives us to work harder every single day at Tracey & Fox."

Walters helped represent Charles Weiss, a Veteran and information technology specialist who was rear-ended at a stop light in 2013 by an under insured motorist. Walters served as second chair on the case with attorney Chance A. McMillian, a former Tracey & Fox clerk and Walters' best friend from high school.

The accident resulted in damage to Weiss' spinal cord, particularly herniations of C4, C5, T1 and T2 vertebrae, Walters said. Weiss' injuries will likely require two surgical procedures. So far, his medical bills have exceeded $35,000, plus other accident-related expenses. Weiss is also expected to have other medical issues in the future due to the rear-end accident four years ago, Walters said.

"Part of his job was limited due to the pain he was in," Walters said. "He did not have the money to afford the two surgeries he needed after his accident. Now that he has the money, he can have the surgery his doctors recommend to correct his accident-related health issues. Hopefully now, he can also live a more comfortable life as well."

Nationwide Insurance offered to settle the case for a figure far below the anticipated future financial impact of Weiss' accident-related injuries. As a result, Walters assisted McMillian with Weiss' case and helped file a lawsuit against Nationwide Insurance in order to obtain the compensation Weiss rightfully deserves.

"Our lawsuit was against an insurance company," Walters said. "My client had been paying for his insurance policy for 30 years every month. And when he needed them the most, they didn't come through for him. So we had to get a jury to come through and do the right thing for our client."

"Nationwide was not on Charles Weiss' side when he needed them the most," Walters said. "The whole reason he had been paying his insurance premiums for 30 years was for situations just like this one. They did not come through for him. They did not take responsibility. They had no accountability. We asked the jury to make Nationwide follow through on their commitment. And justice prevailed."