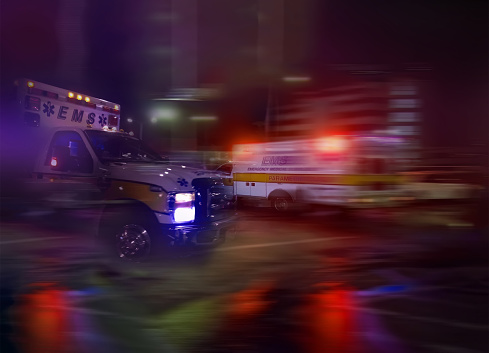 Four people were injured in an early morning fire at an ExxonMobil oil refinery in Baytown, Texas on December 23 in what a local sheriff is calling a “major industrial accident.”

In a tweet, Harris County Sheriff Ed Gonzalez said initial reports indicated that there had been some sort of explosion inside the plant.

Deputies from the sheriff’s office responded to the incident at around 1 a.m. Gonzalez said three people had been transported to a hospital via LifeFlight and one by ambulance.

Refinery manager Rohan Davis told reporters that all four were in the hospital and in stable condition. All other personnel at the refinery had been accounted for, he said.

Davis said he could not confirm whether an explosion had occurred.

“At this time, we’re still collecting all that information,” he said at a news conference. “We will conduct a full and thorough investigation.”

Residents who live near the refinery posted on Twitter that there had been an explosion that rattled their homes.

“Explosion at Exxon! It rumbled my apartment and knocked my pictures off the wall,” said one tweet. Another described a “huge explosion.”

ExxonMobil said that emergency response teams were working to put out the fire. The company said its industrial hygiene staff were monitoring air quality but had found no adverse impact.

Gonzalez said there had been no indications that residents who lived near the refinery would have to evacuate or shelter-in-place. The Baytown Fire Department said it had not responded to the fire.

The 3,400-acre facility includes a chemical plant, an olefins plant, and an oil refinery. According to ExxonMobil, the refinery can process up to 584,000 barrels of crude oil a day.

Oil refinery accidents are nothing new. Workers are surrounded by flammable and toxic chemicals, big machines, and heavy-duty equipment. When something goes wrong, there can be an explosion or fire that puts the health of workers and people who live in the surrounding area at risk.

Those closest to the fire or explosion can suffer severe burns, as well as broken bones and injuries to the head, neck, or back if they were thrown to the ground by the force of an explosion. Workers and people who live near fires can suffer lung illnesses from breathing in toxic fumes.

Tracey Fox King & Walters has handled many cases involving oil refinery accidents. It’s important to investigate promptly to get the facts and determine negligent parties whose actions or inactions caused the accident. Our legal team carefully reviews accident reports, medical records, and inspections from the Occupational Safety and Health Administration (OSHA). We identify and interview witnesses and consult industry experts.

If you were hurt in an oil refinery accident, it’s important to get legal advice as soon as possible. An experienced personal injury lawyer can review the details of what happened to you and explain your legal options. A lawyer can also answer any questions you have.

Contact us today to see how we can help you. We have offices in Houston, Dallas, and San Antonio.