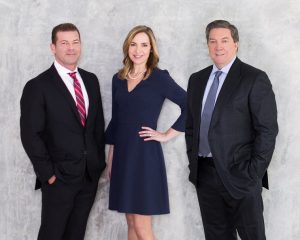 HOUSTON – The law firm of Tracey & Fox is pleased to announce attorney Rebecca King has been named a partner.

Since joining Tracey & Fox in 2014, she has worked in the areas of pharmaceutical drug litigation, defective medical devices, product liability, premises liability and wrongful death. She is licensed to practice law in several different states and districts including Texas, Arkansas, Pennsylvania and the Supreme Court of the United States.

“Rebecca has provided excellent representation for our clients and has been instrumental in our pursuit of justice, particularly in mass tort cases,” said founding partner Sean Tracey. “She shares our commitment to helping improve the lives of people who have been hurt through negligence.”

In 2015, King was appointed to the plaintiff’s steering committee in multidistrict litigation on behalf of women harmed by the use of power morcellators. Many women developed cancer or other life-threatening health problems after undergoing surgery involving the devices.

“I think we’re seeing a lot of women’s health issues in these various mass torts over the past few years,” she said at the time. “It’s necessary to involve women because we bring a woman’s perspective to the case. We can identify with these clients in a way that’s unique.”

In 2016, the Honorable Jane L. Johnson appointed King Plaintiffs’ Co-Lead Counsel of the consolidated power morcellator cases pending in the Los Angeles division of the Superior Court for the State of California.

She was also elected co-chairperson of the Laparoscopic Power Morcellator litigation group for the American Association for Justice.

In 2012, she worked with several other attorneys representing plaintiffs in multidistrict litigation for birth defect claims involving the use of Zoloft during pregnancy.