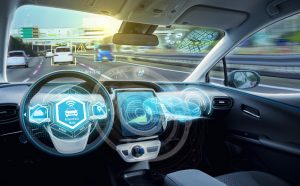 Imagine if cars could talk to each other. One car's coming around a corner. Another's heading towards the same intersection. The two cars then communicate and relay each other's locations, thus avoiding an auto accident.

Such a scenario might sound far-fetched. But this technology is closer to reality than you might think. And if one government agency has its way, every vehicle will eventually be equipped with such potentially-life-saving technology.

What is V2V technology?

V2V stands for "vehicle to vehicle." This technology allows vehicles to automatically communicate with each other once they come within a certain distance of each other. Such information could include each vehicle's speed and direction. Additional information could also be exchanged between vehicles depending on the computer software.

"We are carrying the ball as far as we can to realize the potential of transportation technology to save lives," U.S. Transportation Secretary Anthony Foxx said in a statement issued by the NHTSA. "This long promised V2V rule is the next step in that progression.  Once deployed, V2V will provide 360-degree situational awareness on the road and will help us enhance vehicle safety."

One key issue involves making sure all vehicles' V2V devices, regardless of manufacturer, speak a universal language. Auto manufacturers also want to make sure such information is secure and private.

Technology specialists have been touting all the potential benefits of V2V technology for some time. Wired Magazine claims such benefits could include:

As with any technology, nothing is ever completely perfect. While many technology experts only see the benefits of V2V technology, some potential pitfalls could include:

Other potential dangers people have not even imagined could also arise. Just because a computer programmer insists that nothing will ever go wrong does not constitute a guarantee. This past year, a driver was killed while operating a self-driving car in autopilot mode. That's why it's critical that accident victims always consult with an experienced car accident attorney as soon as possible after a crash. Technology has the potential for radical, year to year change. But the need for trusted, legal advice will always remain an unaltered priority.