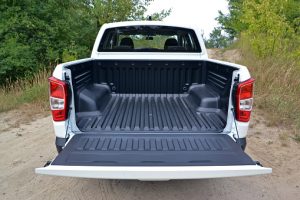 In early 2004, Robin Abel was driving with her daughter Maria Federici when a particle board flew out of the trailer in front of them and crashed into their windshield. The incident left Federici blind and broke every bone in her face.

For the next decade, Abel fought with legislators and doctors for the rights of her daughter. She fought with insurance companies for disability payments, she gave speeches to the Washington State House of Representatives, all while caring for her daughter. “It’s what a mom does,” said Abel. “I had to be there for her.”

Besides caring for her daughter as she learned how to swallow and speak again, she began to write Maria’s Law, an ordinance with the goal of increasing the safety standards of open cargo and the consequences if a driver fails to follow them. Finally in 2015, after Abel had lobbied for over a decade, then-President Obama signed Maria’s Law. In accordance with this law, any driver who does not properly secure their load can face up to one year of jail time and a $5,000 fine.

This accident was far from an isolated incident. Donna Simmons is a public information officer with the Texas Department of Transportation. According to Simmons, accidents like Abel and Federici’s are almost ubiquitous. "I challenge you to bring up the subject with anyone, any time and see if someone in the group doesn't have a story that starts with, 'One time I was following a pickup truck and … It almost happens to everybody.”

This could have been prevented

Accidents like the one that Robin and her daughter Maria were involved in are appalling because they are so easily prevented. Had the driver taken the time to ensure that his or her load was properly secured, Maria would not have been left blind. Because of the driver’s negligence, Maria will have to deal with the effects of this accident for the rest of her life.

The Texas car accident lawyers at Tracey and Fox applaud Robin for her tireless effort to make our roads safer. We can all learn from her example. If you or a loved one have been injured in an accident like Robin and Maria’s, contact us today.