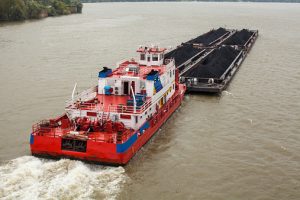 An oil barge fire off the coast of Port Aransas, Texas caused the deaths of two crew members. The barge exploded around 4:30 a.m. on October 21, 2017 in the Gulf of Mexico while being pulled by a tug boat en route to a Texas refinery. Six of the eight crew members were accounted for immediately after the fire was contained. The two unaccounted for crew members were pronounced deceased after the Coast Guard called off search efforts. Sadly, crew member Dujour Vanterpool's body was found by Kleberg County Sheriff's Office when his body washed ashore on Padre Island. The cause of the fire is still unknown.

The explosion caused oil to leak into the Gulf of Mexico, visible in aerial photography of the explosion site. The barge was carrying 140,000 barrels of crude oil. Containment booms were placed around the explosion site to protect environmentally sensitive areas like Mustang Island. Officials also closed Corpus Christi Ship Channel's entrance and jetty channels to mitigate the oil's impact.

Maritime accidents are often catastrophic. From an incident like this barge fire to platform mishaps, the loss of life and life-changing events can be preventable. Ensuring all equipment and vessels are properly maintained is a crucial step in maintaining seaworthy vessels and preventing offshore accidents. Proper training for all crew members and contractors is also a vital step in accident prevention.

Oftentimes human error causes maritime accidents, but it is rarely just one person's error; the organization should be viewed in context as well. In this case, Bouchard Transportation Co., Inc., based out of New York, owns the barge and the tug boat involved in the offshore explosion. Bouchard is the nation's largest independently-owned ocean-going petroleum barge company, with over 100 years of barging experience. However, Bouchard vessels have been involved with similar incidents in the past.

Tracey & Fox has represented many seamen injured while working at sea. We work on behalf of those injured by negligence in unsafe work environments. If you or someone you know has been injured in an offshore workplace accident, contact the attorneys at Tracey & Fox today.