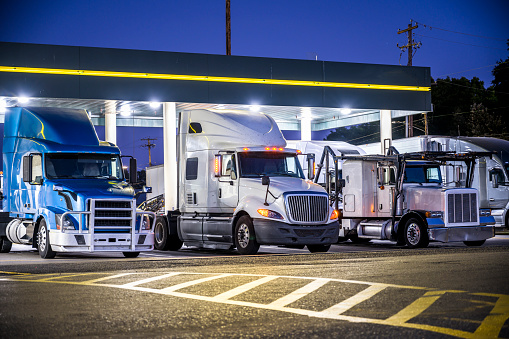 Negligence can lead to a truck accident anywhere in Texas – on highways such as I-10, on busy city streets, or on back roads. A fatal crash in September 2021 happened in a truck stop parking lot in Brookshire. The victim’s family has filed a lawsuit, saying that the negligence of the truck stop owners is responsible for their loved one’s death.

It happened at about 4:30 in the morning on September 3, 2021. Reginald “Reggie” Smithers, 56, was walking into the parking lot of the Flying J, a busy truck stop in Brookshire. It was where he waited for a ride to work every morning.

But on that day, Reggie was hit by an 18-wheeler near the entrance to the parking lot, then dragged 65 yards. Surveillance video shows the truck pulling into a stall and coming to a stop, The driver, Bobby Lee Calhoun Jr., gets out and realizes there is someone under the truck. Calhoun then backed the truck up.

Police were called, but Reggie was dead when they arrived.

“It’s as bad as anything I’ve seen in my life,” Sean Tracey told ABC13. “He was alive. He knew what was happening to him.”

Reggie had 11 children and 34 grandchildren. Family members said he was proud of his big family.

They believe the accident happened because the entrance area of the Flying J had very poor lighting and signage.

“This 18-wheeler driver was handicapped by a lack of lighting in the parking lot,” said Tracey.

Calhoun was cooperative with police, who did not believe him to be impaired. He also referred to the poor lighting during a police interview at the time.

“It’s dark in that area, very dark,” he told police. Calhoun has since passed away.

The family is suing the owners of the Flying J, as well as the trucking company, PBH Priority Express Corp. They note that the Flying J has since put up a light at the entrance, and wish it had been there sooner.

“I hope they get better lighting and put up some signs so it won’t happen again,” said Kristian Allen, Reggie’s daughter. “I just want justice for my dad.”

Flying J has not commented on the lawsuit. PBH said in a response that Reggie “failed to exercise that degree of care which an ordinary person would have exercised under same or similar circumstances.” The company “generally denies” all allegations.

Our firm believes that negligent parties need to be held accountable after a fatal injury. We take a very thorough approach in cases involving truck accidents. This includes investigating what happened to get the facts. We build strong cases and fight for the compensation our clients deserve.

If you or a loved one has been involved in a truck accident, learn more about how we can help. Contact us to schedule a free consultation. One of our attorneys can review the details of your case and explain your legal options. We have offices in Houston, Dallas, and San Antonio.