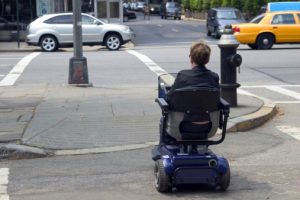 Statewide data asserts that Houston leads Texas as the most dangerous city for road users. According to a 2017 Texas Department of Transportation report, approximately 226 people died on Houston roads.

Across the state of Texas, pedestrians are especially at risk. A 2018 report by the Governors' Association for Highway Safety concluded that Texas ranks 3rd in the nation for the highest number of pedestrian fatalities.

A call for infrastructural changes

Following a fatal intersection crash that killed two people, including a man in a wheelchair, Houston city officials announced upcoming infrastructural improvements near the crash site, according to the Community Impact Newspaper. The crash occurred in the area of Shepherd Drive and 10th Street in the city's Heights section.

The impending infrastructure project will address accessibility issues and sidewalk improvements for disabled people who use wheelchairs or other devices. In addition, these improvements will need to accommodate other disabilities, as well. Maria Town, director of the Mayor’s Office for People With Disabilities, explains.

“The majority of disabilities are not apparent, but they can impact a person’s experience crossing the street,” Town said. “If someone has epilepsy, a police offer is not going to know that.”

Historically, reporting sidewalk safety concerns for people with disabilities was a challenge for many Houston residents. Houston recently revised its 311 call category in order to allow residents to report such issues.

“Previously, if a [concerned resident] wanted to report a sidewalk issue, there was nowhere for her to report that information and get it tracked to the appropriate place within public works,” Town said.

The city will adopt the Vision Zero program with the goal of “drastically reducing pedestrian fatalities by 2030,” as announced by Mayor Sylvester Turner.

The city's Vision Zero program will be employed in conjunction with the Safer Streets Initiative — which addresses Houston's most dangerous intersections and proposes infrastructural changes that promote safety.

In addition, the city's Universal Accessibility Initiative will ensure that 9,000 citywide bus stops are compliant with the Americans with Disabilities Act (ADA) by 2024. The ADA's transportation standards require that all cities have adequate and functional:

Pedestrians with disabilities are often at the greatest risk of being struck at intersections and crosswalks. They usually require more time to cross the street. What's worse, some drivers either get impatient or show little regard for pedestrian safety. In many cases, drivers fail to see pedestrians due to being distracted.

Drivers, however, are obligated to uphold their duty and obey all traffic laws. If you or a loved one was hurt in a crash because someone failed to do so, you are entitled to legal advocacy. The attorneys at Tracey & Fox proudly represented injured pedestrians in Houston and throughout the state of Texas.

To find out how we can help you, contact us online to set up your free case evaluation.