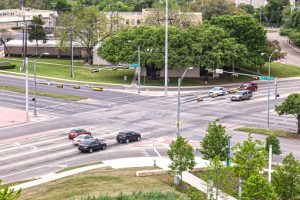 Some areas of town simply have more car accidents than others. The risk of being injured in a car accident can be increased when drivers frequent intersections known for high accident rates.

While it is not always possible to avoid these areas entirely, drivers should be aware of them and exercise particular caution when driving near them.

The Intersections That Are Dangerous For Pedestrians

The Dallas Patch identified high-risk areas for pedestrians in the Dallas metro area. These included the West End and the West Northwest Highway - with a particular emphasis on its intersection with Denton Drive. In total, nine Dallas roadways and one intersection in Plano were included on a list of the 73 most dangerous roads for pedestrians in Texas.

It can be difficult to determine what makes a particular intersection more dangerous than another. One recent study of Fort Worth intersections was particularly illustrative in this respect. NBC Dallas Fort Worth reported that of the 10 most dangerous intersections in Fort Worth, six were along Interstate 35. All six of these intersections were under construction, which can cause drivers to become reactive as opposed to proactive. This makes drivers less able to effectively respond to obstructions in the roadway.

Busier intersections also tend to experience more accidents. This is a simple rule of math: the more miles driven on a roadway, the more likely it is that accidents will occur. This is why many auto accident statistics are reported in accidents per vehicle-mile-driven. These facts can be used to a driver’s advantage. By choosing routes with less traffic and construction, drivers can effectively reduce the odds of being involved in accidents.

Of course, just because you happen to be traveling through a dangerous intersection does not mean that you deserve to be injured. Regardless of where negligent driving occurs, injury victims have a legal right to be compensated for their financial losses.

Our auto accident attorneys have seen just how devastating the effects of a car accident can be. Injury victims may endure lifetime pain, suffering, or disfigurement. They may be out of work for extended periods of time - or even be unable to work at all. Enjoyment of daily life can be impaired by constant pain, limited mobility, and other common effects of auto accident injuries. All of these losses are subject to compensation in a personal injury award.